It’s no secret that Colorado is one of the best states in the country when it comes to fishing. With all of our rivers, lakes, streams, reservoirs, ponds and other bodies of water, there are almost unlimited opportunities for fishermen.

To access many of these great fishing spots–we’re thinking of places like the Roaring Fork, the South Platte, the Fryingpan–all you need is a good pair of waders, a fly rod and a hat.

But for those of us with a boat, thinking large is better. So here are some of our state’s most famous large bodies of water that are popular with fishermen and women.

The Gunnison Valley is home to the Gunnison River, the Taylor River and the Blue Mesa Reservoir. While the first two are primo fly-fishing rivers noted for their trophy-sized trout, the Blue Mesa is a great place to fish for rainbows and lake trout during the summer months.

Starting in June, however, anglers are looking for the kokanee salmon, which can often be found within 20 feet of the surface early in the summer, before they begin to descend down the water table as the hot weather moves in.

The use of downriggers or lead core line to troll or vertical jigging with 1oz-2oz lead jigs as schools of four year olds prepare to run up the rivers in late summer are practically the only two ways to catch kokanee in the reservoirs.

Ruedi Reservoir is a 1,000 acre storage reservoir upstream of the town of Basalt on the Fryingpan River. Ruedi offers good fishing for rainbow trout, lake trout, and occasionally kokanee. Recreation facilities consist of 4 campgrounds accommodating 81 campsites and 2 boat-launching ramps. Call the U.S. Forest Service at 970.945.2521 for information on campgrounds and boat launches.

Lake trout are often found in deep waters near the dam during the summer. Rainbow trout fishing is good year round using traditional baits. The state recently restarted its stocking program for kokanee salmon and that species is making a comeback. There is  no bag or possession limit on the western slope.

The South Platte River is a popular fishing destination for Denver area residents. But there are three impoundment reservoirs along the river where boaters can get in on the fun.

The Antero Reservoir, derived from the Spanish word for “first,” is so named because it was the uppermost dam on the South Platte. It’s a relatively shallow lake, but anglers will find brown, rainbow and cutthroat trout here.

The 2,500-acre Spinney Mountain Reservoir is a Gold Medal fishing destination with views of the Collegiate Mountains as a backdrop.

The Eleven Mile Reservoir, just south of Spinney Mountain, is one of Colorado’s largest reservoirs, and a popular place for boaters and other outdoor recreation during the summer months.

The fishing is great here: rainbows, brownies, cutthroat, kokanee, and pike are all abundant. The State Park here has some 349 camp sites and offers more than five miles of hiking and biking trails.

Located in Jackson County, this coldwater impoundment lake nestled in the Buttes State Wildlife Area is a little bit of wilderness not far from North Park.

Best known for its trophy brownies and rainbows, this lake is also regularly stocked with a cutthroat/rainbow hybrid species.  The lake is also managed as a wild brown trout egg source for the entire state, providing more than a million trout eggs every year.

There are three lakes adjacent to one another. Camping is free along the shore, and facilities are somewhat limited in this wild part of the state. If you want to get back to Nature (including, at certain times of the year, when the skeeters are out in force!), the Delaney Buttes lakes are the place to do it. 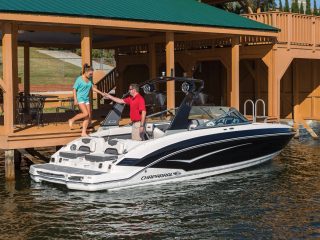 Tips For Getting Your Boat Ready For the Season

While the weather might still be cold, the calendar is creeping closer to the [...] 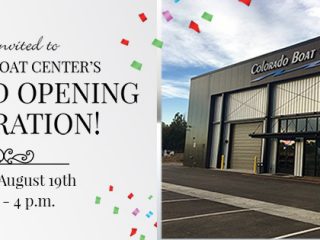 Join Us For Our Grand Re-Opening on August 19

Come to Colorado Boat Center on August 19 to join us in celebrating the [...]

Woofin’ It – Boating with your dog

No member of your family is as excited to go out for a ride [...]