Ethanol is back in the news.  You may have heard that the Biden Administration recently announced a waiver on the Clean Air Act that will now allow the sale of gasoline containing 15 percent ethyl alcohol, or ethanol, during the summer months.

This move is intended to lower fuel costs and stretch the nation’s gasoline supply during the busy summer months, as well as reducing certain emissions.

But boat owners should be aware that using 15 percent ethanol gasoline (E15) in their boats can be harmful to the boat’s engines.  In fact, federal law prohibits the use of E15 gasoline in boats, motorcycles, off-road vehicles and power equipment.  E15 gas can cause damage to your boat’s engine and void the manufacturer’s warranty.

The reasons are simple. Ethanol gas attracts water molecules, and there are plenty of water molecules in and around boats.  When enough water molecules are absorbed inside a gasoline tank, something called phase separation happens: the ethanol and water molecules separate from the gasoline and sink to the bottom of the tank. If that gunk gets sucked into your fuel lines, the results can be poor performance: misfiring, hard starts, poor compression, and running hot.

And, the E15 mixtures can be hard on fuel lines, gaskets, even eating away at the plastics in the fuel tank itself. All in all, not good!

Since many of our customers own boats that are trailered, and are used to fueling both car and boat at a gas station, they need to be aware of the kind of gas they’re pumping into their boat’s fuel tanks. Your auto may be able to operate with the E15 additives, but your boat cannot.

Best practice is to refuel your boat only at marinas and fuel docks, where the E15 mixtures will NOT be sold. And make sure to ask about the blend before pumping it into your boat. Unfortunately, it can be hard to tell what the fuel blend is: sometimes the E15 gas will be identified by an orange label on the pump, but not always. So ask before you pump.

We’re all in favor of reducing car emissions and lowering smog in our cities. But not at the expense of ruining our marine engines. 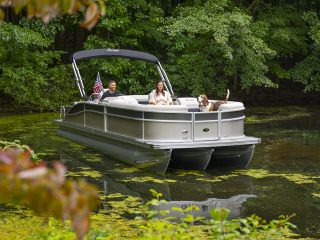 Woofin’ It – Boating with your dog

No member of your family is as excited to go out for a ride [...] 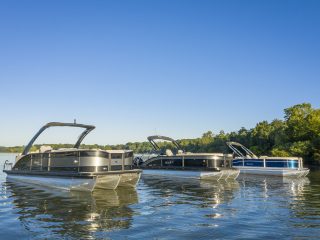 We were very excited to add the Barletta brand of luxury pontoon boats to [...] 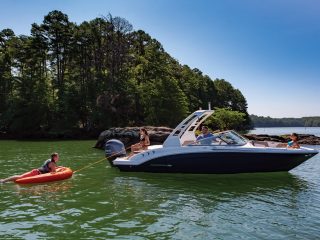 There are few things more fun to do with a boat than dragging your [...]